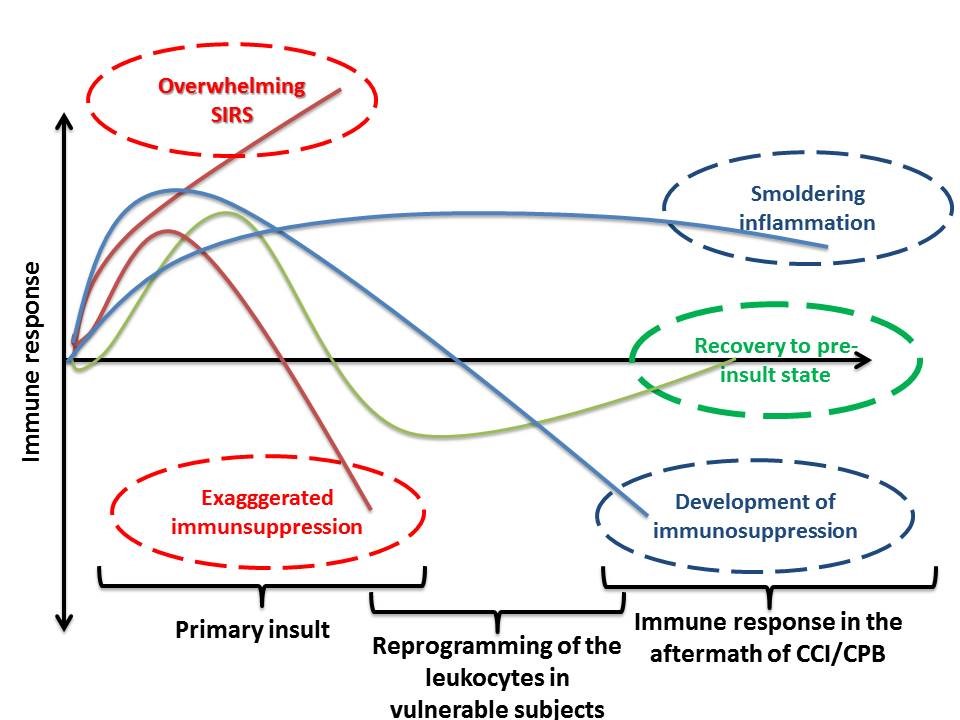 Annually, over two million people encounter critical care illnesses (CCI; e.g., sepsis, trauma, burn, severe surgery like heart surgery, hip replacement, traumatic brain injury and pancreatitis) in the US. Unsurprisingly, the post-CCI syndrome is ranked as the fourth leading cause of mortality and morbidity, with profound clinical, societal, and economic significance to both individual patients and society. Despite its importance, this is an under-investigated area of research, with the majority of studies focusing on the early inflammatory response. It was previously believed that the host’s body returns to pre-insult homeostasis after CCI, but Medzhitov et al. suggested that a new immunological state emerges post-CCI, one which could have a detrimental clinical effect. Evidence demonstrates that the initial insult alters the immune system and determines its responses to subsequent challenges for an extended period. The abnormal response to subsequent immunological challenges is the reason why some patients are prone to progressive organ failures, hastened atherosclerosis, the resurgence of opportunistic infections, and a decline in cognitive functioning in the months or years after the initial insult. This is of utmost significance for patients’ long-term health.

My prior research showed that the function of MO is severely depressed even long-term after mechanical trauma and burn. MO is atypically activated and are unable to differentiate into dendritic cells, a controlling arm of the immune system. Concomitantly, T cells are anergic in some patients after severe trauma. Anergic means that cells cannot respond to the challenges and are somewhat inert. GlueGrant aimed at characterization of the longitudinal gene changes showing a genomic storm. However, the mechanisms governing long-term “recovery” from the CCI remain mostly a mystery. Epigenetic mechanisms have been suggested to underlie long-term post-CCI aberrancies, but few studies have appeared., I showed that certain epigenetic changes are evident in septic humanized mice and patient undergoing surgery. These changes persisted for even three months and are related to abnormal immunological activation. It is possible that residual inflammation, or the emergence of new immune-stasis, is the defining point deciding which patients will recover fully versus which ones will leave a permanent mark after experiencing anesthesia/surgery/critical care illness.